Inventory accounting and management are key functions in manufacturing and trading companies. Inventory consists of everything from raw material, production consumables to work in progress and finished goods. Large manufacturing and trading companies have considerable amounts invested in their inventories and thus its accounting and management assumes an even more important role. Inventory accounting involves valuation of inventory on hand at the close of an accounting period as well as valuation of cost of goods sold during that period.

This article looks at meaning of and differences between two types of inventory accounting methods – FIFO and LIFO.

First-in-First-out or FIFO inventory accounting method  values inventory (stock in hand and cost of goods sold) on the basic assumption that inventory that is purchased/brought in first will also be utilized/transferred out first.

A numerical example of how FIFO method works for a trading company is detailed below: 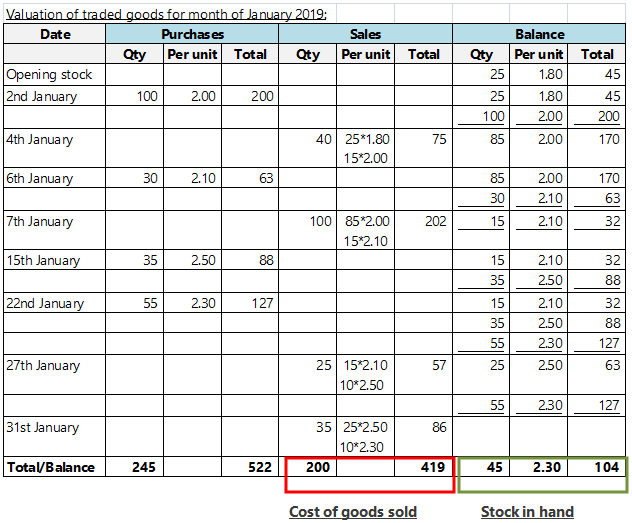 As is demonstrated above, under the FIFO method, the goods purchased last (on 22nd January) remain in stock on 31st January.

The benefits of FIFO method make it more widely acceptable, being recognized and permitted by both the International Financial Reporting Standards (IFRS) as well as by US GAAP.

FIFO does however suffer from some drawbacks:

Last-in-First-out or LIFO inventory accounting method values inventory (stock in hand and cost of goods sold) on the basic assumption that inventory that is purchased/brought in last will be utilized/transferred out first.

A numerical example of how LIFO method works for the same example above is detailed below:

As is demonstrated above, under the LIFO method, the goods purchased earliest (opening stock and on 15th January) remain in stock on 31st January.

This can cause potential reduction in tax cost in an inflationary price environment. In times of rising prices, this will result in higher charge of cost of goods sold to profit resulting lower profit and tax cost.

Due to its impact on reduction in tax cost, LIFO method is not permitted by IFRS. It however continues to be recognized and permitted under US GAAP.

The key disadvantage of LIFO method is that it values at inventory at historical and often very old costs. This leads to understatement and an often unrealistic valuation of stock in hand.

Differences between FIFO and LIFO:

Difference between FIFO and LIFO have been detailed below:

2. Goods that remain in inventory

3. Valuation of stock in hand

4. Valuation of cost of goods sold

A tabular comparison of FIFO and LIFO is given below:

Inventory management and accounting is an important focus area, especially for large manufacturing and trading entities. FIFO method follows more realistic approach, in that most entities would also prefer to sell/transfer their older inventory first to reduce the risk of obsolescence. LIFO method on the other hand is a relatively irrational method as it rarely mimics actual physical movement of inventory. This is why FIFO method is far more popular than LIFO method. There are also other methods of inventory valuation which can be adopted by entities, (subject to the jurisdictional GAAP regulations) such as specific identification method and weighted average method.