Difference between ROI and RI

Return on investment (ROI) is a measure which calculates the efficiency of an investment by calculating percentage of return earned by that investment.

Residual income (RI) is the amount of income an investment opportunity generates above the minimum level of rate of return.

The formulas for the calculation of return on investment (ROI) and Residual income (RI) are given below:

Assuming that the capital structure of Maria Enterprise does not change, the ROI or return on investment for the year 2017 and 2018 would be: 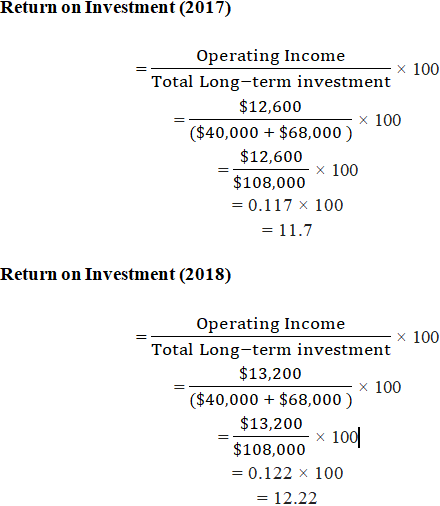 For the calculation of RI or residual income for Maria Enterprise, the minimum required rate of return of the company would be considered in order to calculate the minimum income possible to earn on the available investment. If operating assets of company are assumed to be $79,000 and operating income equal to the profits earned, RI would be:

Difference between ROI and RI:

The main points of difference between ROI and RI are given below:

RI is a more flexible approach which can be manipulated easily. This is because the change in cost of capital of the company can change the results obtained by the RI calculation. The calculation of cost of capital for a company is itself a complicated task for the business because it takes into account the expected return of both shareholders and creditors. ROI is an approach which is hard to manipulate as it includes variables that are properly documented and traceable.

The ROI shows the return to a company in percentage terms. This percentage can be calculated for a product, a division or the whole organization. RI, on the other hand, shows return that a company is earning in monetary terms. It basically highlights the favorableness of an investment by comparing it with the least favorable option which is the minimum amount of interest a company could have earned on its investment. This is the reason why RI can help in decision-making while considering new investments.

A project is deemed favorable if the ROI of that project is equal to or more than the target ROI of the company or project. If, ROI is calculated for a new project, business may alter its target ROI based on the industry or product or market related to the new project. As RI method is used to assess the financial efficiency of invested capital, it is not usually used for specific decision-making rather it can aid management to understand the level of opportunity cost upon their investment decisions.

Unlike profits or operating income of a company, return on investment shows the amount of returns or losses that a company is earning or bearing if compared to the capital invested. This measure can be used to evaluate many areas of business including the handling of inventory or stock (ordering, holding, operating cycles etc.), the pricing strategy of the company and future investment decisions based on the target ROI of the company. Whereas, the residual income highlights the ‘opportunity cost’ for the invested capital of a business. This measure highlights the real value of capital invested and can identify ‘income valuation’ of a project by showing the compensation that the company is getting above the minimum possible ROI.